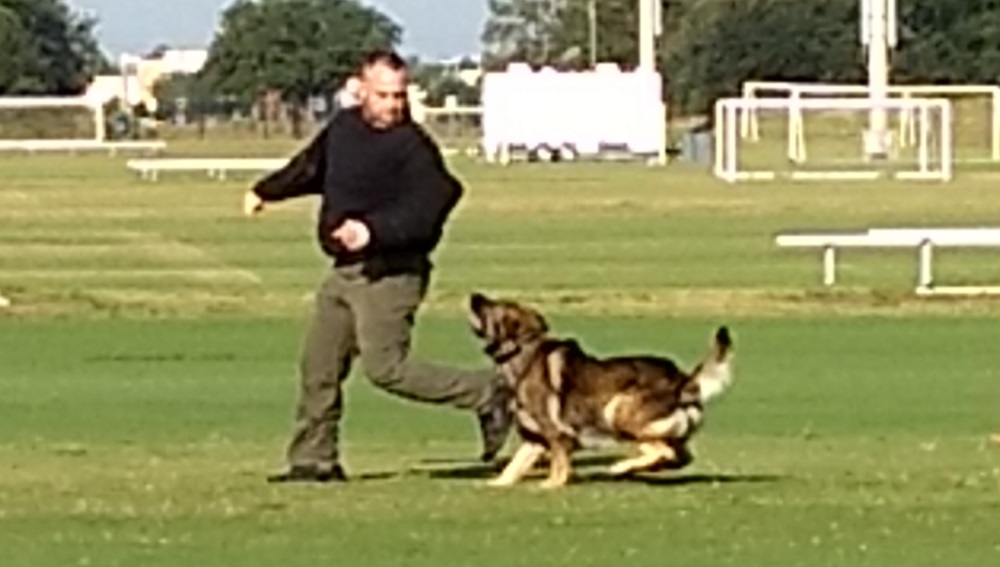 And Let A Big Dog Take Over

We love our dogs. They bring us great joy and companionship. If you want to see a special relationship between man and dog, look no further than your local police K9 unit. Police K9s are amazing animals – intelligent, obedient, agile, loyal, and fearless. Not to mention very-well trained. Police K9s and their officer handlers spend countless hours together, living, training, and working. And, during that time, they build a bond that ultimately determines their effectiveness on the job.

The bond between man and dog began over 10,000 years ago. This special relationship with “man’s best friend” has taken many forms over time from protector to hunting companion to frisbee buddy. One of the most interesting is the use of dogs in law enforcement. Dogs have been used in police work for over 100 years. The development of K9 units in U.S. police departments began to take hold in the 1970s. Today, it’s common to see police K9 units in most departments across the country.

To be an effective team, a strong bond between the officer and his dog is vital. Dogs quickly learn to respond, not only to their handler’s verbal commands, but also to his body language. Dogs have demonstrated a remarkable ability to read human commands, gestures, and emotions. Like human infants, dogs pay very close attention to the people close to them and respond instinctively or as trained.

Police K9 training starts at a young age with basic puppy obedience training. Specialized police training begins around the one-year mark for the dog. Then, K9 officers and their companion dogs are put through an intensive training program lasting many weeks. Following this training, most police K9s achieve certification from independent organizations like the United States Police Canine Association before they hit the street.

Police K9s function in many roles including tracking, search, detection, protection, and apprehension. They are typically trained to be either single purpose or dual purpose dogs. Single purpose dogs serve primarily for protection and tracking while dual purpose dogs do everything a single purpose dog does plus detection work. Detection involves sniffing for explosives or drugs, but dogs are never trained to detect both. This is simply a matter of safety as the dog cannot communicate whether he has found a bomb or some marijuana. The police procedures for handling explosives and drugs are very different.

Many dog breeds are used in police work. German Shepherds, Belgian Malinoises, and Dutch Shepherds are popular for patrol duties while Labrador Retrievers and Bloodhounds are often used in detection and tracking. And, it’s not uncommon to see Beagles and even some rescued, mix-breeds doing detection work.

Police work is inherently dangerous and it’s no different for police K9s. The Officer Down Memorial Page reports 34 K9s killed in the line of duty in 2016. In most jurisdictions, it is a crime to assault a police K9. When killed in the line of duty, they receive a funeral with full police honors. To the officers and their K9s who stand in the gap every day to protect others, we salute you and we thank you!

The Foley (Alabama) Police Department recently hosted the 2017 United States Police Canine Association K9 trials. This event brought K9 units from around the country to Foley for an annual competition. Awards were given to the top dogs in categories including obedience, agility, suspect search, article search, and criminal apprehension.

Would you like to see a real police K9 takedown?   Watch this...

Welcome Our New Pet Sitter!
Move Over Rover
Would You Ever Abandon Your Pet?

Get Down with Keyboard Cat